Rocko's Modern Life Wiki
Register
Don't have an account?
Sign In
Advertisement
in: A to Z, T, Episodes,
and 11 more

To Heck and Back is the second segment of the fifth episode of Rocko's Modern Life from the first season.

Rocko's best friend Heffer chokes on a chicken rib cage at a Chokey Chicken and has an after-death experience with Peaches in "Heck".

The episode begins with a chicken named Karen getting the job at Chokey Chicken after a job interview. A few moments later, a vacuum-packed chicken is seen accelerated on a conveyor belt and put into the truck, which is headed to said restaurant. Rocko and Heffer are also there and Heffer orders a prolific amount of food, spending a grand total of $37.58. While Rocko is discussing Heffer's eating habits, the steer virulently chokes on a chicken rib cage when he swallows it. As Rocko attempts to perform the Heimlich on his lifeless friend, Heffer's spirit emerges from the body and flies to heaven. He tries to fly to a big sandwich in the sky, only for his wings to melt and an anvil sprouts on his back, causing him to fall down to the ground into "Heck" (a euphemism for the word "hell").

Peaches captures him and explains the 7 deadly sins of gluttony. Back at Chokey Chicken, Rocko attempts to grab the chicken rib cage lodged in the lifeless steer's throat, only to fall into his body. Heffer watches a show on TV (offered by Peaches) of his voracious eating habits in the past, which upset and angered others, such as Grandpa Wolfe, whose birthday cake Heffer swallowed whole (the cake is later seen within Heffer's stomach in pristine condition including lit candles). When he sees that Rocko has entered the inside of his stomach on TV, Heffer is contrite of his gluttony and Peaches sends him to an opening light, where he sees Rocko walking through. Peaches laughs malevolently and removes his black hood to reveal his udder-shaped head, which has milk squirting out of it. Rocko, however, switches on the light of Heffer's heart and Heffer is quickly resurrected, much to Peaches' disappointment. Heffer is later seen spitting Rocko out as the wallaby has retrieved the chicken rib cage out of the steer's throat. Heffer and Rocko walk out to attend the movies and Heffer asks if the two could stop at the Beef Barge to eat again (Clearly not learning anything from his trip to heck), only to find that the wallaby is disguised as no other than Peaches once again.

Later, Heffer wakes up in his bedroom to find that it was only a dream. But Peaches returns once again. Heffer then wakes up to find that he had been sleeping with his head in the pretzel box. Heffer goes with Rocko to attend the comic book sale (but not before he asks if he and Rocko stop to Chokey Chicken first) when Karen (from earlier in the episode) comes around and tells him that she has a job interview at Chokey Chicken. and Peaches appears playing with a paddle ball at the end, having to start from scratch, to his dismay. 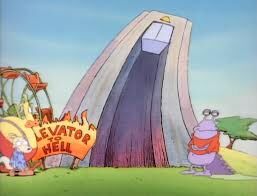