Rocko's Modern Life Wiki
Register
Don't have an account?
Sign In
Advertisement
in: A to Z, T, Episodes,
and 13 more

View source
watch 01:36
We're Getting Mutants in the MCU - The Loop
Do you like this video?
Play Sound

The Big Answer is episode 37b of third season of Rocko's Modern Life.

After getting engaged at their high school reunion, Filburt and Doctor Paula Hutchison are finally about to get married. While her mother, still against her daughter marrying a turtle, plans the wedding and helps out with the preparations, a bachelor party for Filburt is taking place at an ice cream parlor featuring an airliner similar to an Airbus A330 mounted on a stand, where they are celebrating with ice cream. But Heffer eats too much ice cream and goes nuts and busts his way into the cockpit and hops down at the controls. He pretends that he's a "dive bomber madman" and begins working the controls. Then he knocks out the pilot and the plane flies off of the stand and into the sky! While Rocko & Filburt attempt to recover the aircraft, Paula has made her decision and says she will marry Filburt. but her mother is not happy at all and feels disappointed. This causes Paula to cry for her cruelty and she goes away while the airliner flies over Paula's apartment. Back at the plane, with Heffer restrained, Rocko & Filbert manage to regain control of the aircraft and try to radio for help, only for him to find out he's talking to a pig. Heffer kicks Fillburt's co-pilot seat and Filburt fights back. Heffer pulls Rocko away from the flight controls and the aircraft goes into a nosedive and crashes onto the front lawn of Rocko's house.

As the three wake up the next morning, they discover that it is 11:45 A.M. Filburt dresses up and goes on a search for Paula. He finally finds her on top of the Conglom-O building and makes it on top of the roof, where he catches Paula as she falls off the globe. The nervous Paula says she cannot marry Filburt, much to his disappointment.  Rocko & Heffer rush to the place of the wedding and stall the family. After Heffer starts an incitation to battle between turtles & cats, the turtles counterattack and fire a huge spread of water and a huge fight breaks out at their wedding service between the families of cats and turtles, threatening Filburt and Paula's marriage. But fortunately, Filburt & Paula had already married with the decision of not involving the families. Paula's father Frank (who is a turtle and owns the airplane restaurant that crash landed in Rocko's front lawn) decides to give their blessings while reuniting with his widowed wife. In the end, Filburt and Paula went to their honeymoon on the same aircraft where the bachelor party took place. 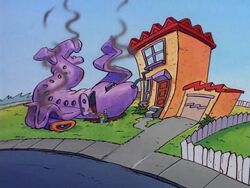 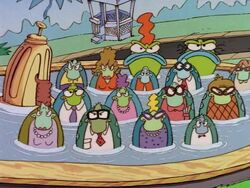