Magdalane "Maggie" is a scrapped character and was originally designed as the sister of Rocko. She would have had two children, being either the niece(s) or nephew(s) of Rocko.

Murray included her in early presentations of the Rocko's Modern Life concept. When Murray further developed the concept, he decided that the show would carry more effect if Rocko had no family in O-Town. Murray wrote an episode script, titled "Wake Up Maggie", which portrays Magdalane suffering from narcolepsy. Murray stated that Nickelodeon believed the episode to be "a bit odd" while he believed that the episode was "touching."

Appearances in the official series

Although Magdalane never officially appeared in the series, she made a few cameos and appeared to be younger than her brother, unlike what Murray intended. She made a brief appearance in a photo of Rocko's entire family as a baby in her mother's pouch in Trash-O-Madness, and she appeared in a flashback sequence in "Wimp on the Barby" where Rocko was leaving while being chased by Dingo, but not before saying goodbye to his family. 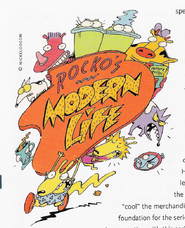 Add a photo to this gallery
Retrieved from "https://rockosmodernlife.fandom.com/wiki/Magdalane?oldid=22763"
Community content is available under CC-BY-SA unless otherwise noted.