"Is that a sausage in your pocket?"

Heffer's only appearance in the Pilot.

Heffer in a car with Rocko and Filburt

Heffer with his brother Peter and brief girlfriend Elkie 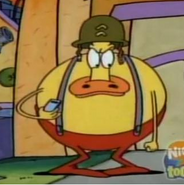 Rocko and Heffer as Hansel and Debbie

A shaved and elderly version of Heffer in Camp Lazlo.

A normal version of Heffer (animated by Dan Sills) in Camp Lazlo's alternate ending.
Add a photo to this gallery
Retrieved from "https://rockosmodernlife.fandom.com/wiki/Heffer_Wolfe/Gallery/Snapshots?oldid=34456"
Community content is available under CC-BY-SA unless otherwise noted.