Claudette is a French female wallaby. She only appeared in the episode, I See London, I See France. A resident of Paris, Rocko fell in love with her at first sight when he saw her as he and Heffer were on a vacation trip to Paris. Rocko had very strong feelings for her, even calling her the, "girl of his dreams." Throughout the episode Rocko chased Claudette through Paris until finally catching up to her (and Heffer) at the Chokey Chicken restaurant in the Eiffel Tower. At the end of the episode, Heffer stated that Claudette probably really likes Rocko, but Rocko denied his feelings for her, stating that he likes Melba Toast more. 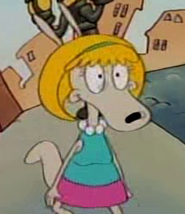 Add a photo to this gallery
Retrieved from "https://rockosmodernlife.fandom.com/wiki/Claudette?oldid=16148"
Community content is available under CC-BY-SA unless otherwise noted.